Home National News Odd News Meet Chinese Human Snail Who Carries His Home on His Back Wherever...
Facebook
Twitter
WhatsApp 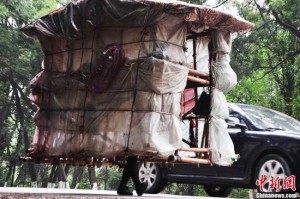 38-year-old Liu Lingchao is a real-life human snail who carries his 60-kg-heavy house on his back wherever he goes. Made of bamboo poles and plastic sheets, the portable home provides shelter on Liu’s long travels through China.

Liu Lingchao makes a living selling plastic bottle and metal cans he picks up from the streets of various Chinese cities. The man from Rong’an, Guangdong Province, built his first mobile home five years ago, as a way to save money on his long journeys, and for protection against rain and cold weather.

Liu found life as a snail to his liking, and has since then worn out three bamboo huts. His newest one is 1.5 meters wide and and 2.2 meters tall, offering him just enough room for a modest bedding and his travel necessities. Its 60 kg weight is not exactly easy for one man to carry, so Liu really is moving at the pace of a snail along China’s roads, but it beats having to look for shelter wherever he goes, and says the fact that he can settle down virtually anywhere he wants is worth the effort. The human snail left Wuzhou City several months ago, and is now just 20 miles away from completing an epic 270-mile walk and returning to his home town.

The Chinese are really resourceful when it comes to housing. Three years ago, we wrote about Daihai Fei, a young designer who built himself a sustainable egg house insulated with a layer of stitched bags. Then there was the story of the young couple living in a small cargo truck, or the family who made a public toilet their home.