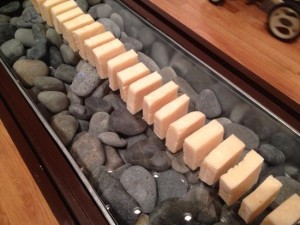 Miami-based performance artist Orestes de la Paz has put his heart, soul and fat into 20 bars of special soap made with his liposuctioned blubber. The bars of human soap are available for purchase and priced at $1,000.

Orestes de la Paz underwent a liposuction procedure in December of last year, and decided to turn the removed fat into soap to prevent it from going rancid. He came up with the idea for his  art thesis after realizing that “clients are willing to try anything to feel and look beautiful, even to the extent of buying products with human elements in them (stem cells, placenta, semen; you name it, it’s out there.)” Working as a hairstylist and make-up artist, Orestes loves combining the worlds of art and beauty together, so the unusual project sort of made sense to him. Apart from coconut oil, organic vegetable shortening, lavender and tree tea oils, as well as other cosmetics ingredients, his unique soap bars are 25% human fat, which apparently leaves the user’s hands soft after washing. “There’s always a certain amount of blood, sweat, and tears that goes into any artwork. I just make it more explicit,” the artist said about his bizarre project.

When he first got the idea to use fat from his liposuction in an art piece, he was going to turn into some kind of acrylic memoir, but his doctor told him that in order to keep it he would have to convert the blubber into something else. That’s when all the extensive biology classes he took during college finally came in handy – he remembered soap is made with fat. “There’s something about converting the notions about how we approach fat that can sometimes be seen as dirty or repulsive … Being able to convert it into something that is cleansing and also potentially healing reflects off of the phrase ‘Cleanliness is next to godliness.’ Cleaning the outside with stuff from the inside. Converting something that was dirty and putting it into something that was clean, and then putting that thing that I saw as dirty onto my body and reclaiming what I was ashamed of before, ” de la Paz told the Miami New Times.

“Making Soap”, Orestes’ art thesis, is currently displayed at Miami’s Frost Museum, where attendees can actually wash their hands with his lipo-soap. ”The museum-goers were so at ease, that the idea of the soap being from human fat escaped their minds and they simply enjoyed the soap for it’s lavender, tree tree scent and the way it left the hands soft after washing,” the artist told HuffPost Miami. ”Those brave enough to wash ended up inspiring others to simply to try a good product. No one seemed disgusted by the soap demo even after having watched the video in the gallery.”

People interested in this organic human fat soap can buy a bar for $1,000, but he has extended a special invitation to the all-thing-weird lover we all know as Lady Gaga. “I challenge @ladygaga to try my human fat soap. You down, homie?” Orestes de la Paz wrote on Twitter.