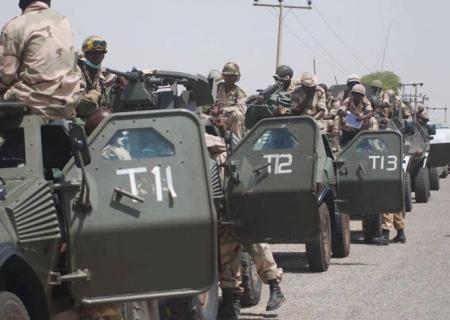 Troops deployed in Borno State by the Federal Government under the State of Emergency declared by President Goodluck Jonathan on Tuesday, have recaptured 17 towns and villages allegedly controlled by suspected members of the Boko Haram sect.

The troops, which started arriving the state on Tuesday night headed straight for the communities where the insurgents had allegedly removed the National Flag and hoisted theirs and engaged them in a series of gun battle.

The communities which were identified as Boko Haram safe havens and have been taken over by the troops are New Marte, Kirenuwa, Zabamari, Zambiza Forest, Mafa, Baga, Bama, Banki, Woloji, Gulumba, Gamboru-Ngala, Damasak, Malam Fatori, Abadam, Gashigar, Kukawa, Monguno, among others.

Although the top military echelon is silent on the strength of the troops deployed in Borno, Information Nigeria learnt that it ranged from 4,000 to 10,000.

The Joint Task Force (JTF) spokesman in Maiduguri, Lt-Col. Sagir Musa, said that “the troops were special squads from the Defence Headquarters on special assignment and have their separate officers who can speak on their mission in the state.

He said: “The troops cannot expose their plans or strategies on how to flush out the insurgents from their hideouts. This is a security matter that cannot be disclosed to the media.”