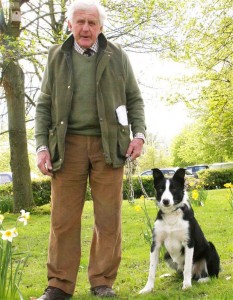 Bob was bought for almost £10,000 by an anonymous bidder at auction, beating the previous record of £8,400 which was set last October.

John Bell, a retired farmer of Howden, East Yorks, bought the 15-month-old sheepdog for £315 when it was 13 weeks old and trained it for life in the field.

A year later, Mr Bell has sold Bob to a telephone bidder — thought to live in the United States — for £9,240 at Skipton Auction Mart.

Mr Bell told The Telegraph that the dog’s temperament and eagerness to pick up new tricks made it one of the best sheepdogs he had ever come across.

“He was very obedient and always good with the sheep,” the trainer said.

“He had a lovely character and a good temperament, he was calm but intelligent and always responded to the commands. The standard of work he was capable of doing was excellent, he got the hang of it very quickly. He was a natural.”

Mr Bell, who is currently training eight dogs, said: “I always try to keep the dogs interested and happy rather than going on and on until they get bored like a child at school, so I kept teaching him new things and he kept learning.

“He is a very good dog, everybody who saw him thought the same. Bob is one of the best I’ve seen.”

He said the secret to producing a champion working dog was spotting the intelligent ones when they are puppies, and good training.

“Some are more talented and will do better than others, of course, like people, so you have to spot the signs. One of the biggest skills is spotting the potential in a young dog.”

Mr Bell started training sheepdogs as a teenager, selling them to local farmers for between £15 and £20.

He went on to own his own farm in Lancashire and dog training fell by the wayside, but he took it up again 15 years ago when he retired.

“I started again as a hobby, and it has turned into a passion,” he said.

The married father said he features his dogs on YouTube, the video-sharing website, before he sells them, and invites potential bidders to his farm to see the herders in action.

Mr Bell, who in his younger days was an accomplished runner and rugby player, has now sold three dogs for a record price at official sales for animals under 12 months old.

Previous dogs sold by the trainer at the Skipton Auction Mart — where he also bought Bob 12 months ago — have gone on to achieve high-profile successes in sheepdog competitions, including both English and Scottish national trials and an international driving championship.