Home Metro News Most Of The 150 Private Jets In Nigeria Are Owned By Fraudulent...
Facebook
Twitter
WhatsApp 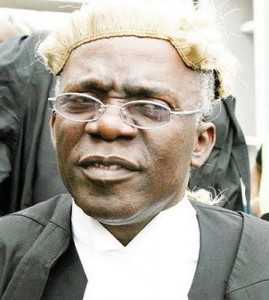 Human rights lawyer, Mr. Femi Falana, has said oil subsidy fund thieves own most of the 150 private jets in Nigeria.

He also said the ill-advice Nigeria had taken from the International Monetary Fund has encouraged corruption.

“I hope the Jonathan regime will have the courage to ask the IMF to name one country that has succeeded after implementing its anti-people’s prescriptions. There is no success story anywhere in the world,” Falana stated.

In his reaction to IMF’s recent call for the removal of fuel subsidy, Falana told Punch that the organisation had ill-advised the Nigerian government not to build refineries.

The IMF had urged the administration of President Goodluck Jonathan to remove subsidy completely to ensure fiscal adjustment.

Rogers also recommended that the Federal Government should mobilise non-oil revenues and strengthen oil-price rule and oil savings mechanism, while pushing for the maintenance of a tight monetary policy.

Falana, however, said, “Let the IMF be honest to tell Nigerians the cost of producing a litre of oil. You will be shocked. The IMF advised the government not to build new refineries, as part of the package of fraud to destroy the economy, even when it knew that the country needed to generate huge revenue from the sale of petrol refined locally.

“As the government needed to import fuel to augment local consumption, it enriched its cronies who engaged in fraudulent importation of fuel through fake mother and daughter vessels. Most of the 150 private jets in the country today are owned by fraudulent fuel importers.

“Last year, the IMF and its local lackeys claimed that the economy would collapse if petrol was not sold at N141 per litre. But with massive strikes and protests, the price was reduced to N97. Did the economy collapse? These are voodoo economists.”

Falana said IMF should have probed the foreign accounts where stolen funds are kept, including about $7bn made by oil thieves from the illegal business of selling stolen crude oil on the high seas.

He further alleged that the Federal Government had refused to reconstitute the Petroleum Products Pricing Regulatory Agency “in order to sustain the fraud.”

The Senior Advocate of Nigeria accused successive presidents from the ruling Peoples Democratic Party of being responsible for the irregularities in the petroleum sector. He queried the basis for the establishment of Subsidy Re-investment and Empowerment Programme.

He said while the highest lending interest rate in the West was between three and five per cent, the IMF had allegedly insisted that it should be over 20 per cent in Africa. He added that the IMF and the World Bank allegedly conspired to impose the Structural Adjustment Programme on the economies of African countries in the 1980s. [Punch]