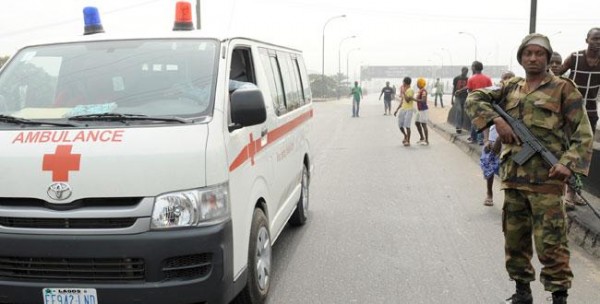 A nursing mother with a baby strapped in her back was knocked down by an ambulance attached to the Kogi State Government House on Sunday. National Mirror learnt that the victim was on a commercial motorcycle when the ambulance hit \ them from the rear. She died on the spot, while the three-month-old baby in her back miraculously survived the crash.

Eye witnesses said the woman was returning from the church when the incident occurred.

They said the commercial motorcyclist, who sustained serious injuries, was immediately rushed to a private clinic where he died a few hours later. Meanwhile, a statement signed by the Special Adviser to the Governor on Media and Strategy, Mr. Jacob Edi, said the ambulance van was not in the governor’s convoy when the accident occurred.

The statement claimed that the accident occurred when the commercial motorcycle operator conveying the woman suddenly ran into the highway.

The statement said immediately the governor was briefed about the incident, he expressed shock and ordered that the baby and motorcyclist be taken to the specialist hospital for adequate treatment. The baby is responding to treatment as at the time filing this report.

Share
Facebook
Twitter
WhatsApp
Previous articleMan Wins N1.5 Million For Having The Ugliest Face In The World
Next articleBusinessman Drags Firm To Court Over N40m Debt
- Advertisement - Ad ==> TRUTH FINALLY OUT! Discover how a young Nigerian graduate now makes a consistent 40k per week doing a legitimate online business. You too can start yours now, click here!!!