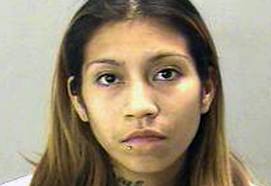 A woman was sentenced to life in prison after beating and super gluing her daughter’s hands after having difficulties with potty training.

The Dallas woman who abused her 2-year-old daughter also beat the girl so badly that she suffered bleeding in her brain, a doctor said Monday during the sentencing hearing of the mother.

Elizabeth Escalona is going to spend life in prison after pleading guilty in to attacking her daughter, Jocelyn Cedillo, in September. Police say the 23-year-old mother attacked the girl due to potty training problems.

During a sentencing hearing that began Monday, prosecutors showed gruesome photos and details of the attack. Jocelyn was hospitalized for a week with injuries including bleeding in her brain, a broken rib and severe bruising probably caused by direct blows, according to Dr. Amy Barton, former child abuse specialist at Children’s Medical Center of Dallas.

“When I think about the time it took at the scene and what it must have looked like, it is overwhelming,” Barton said. Dallas Police Cpl. Abel Lopez, who interviewed Escalona after the attack, showed a bottle of glue out of the family apartment and a flat section of a wall with handprints of Jocelyn.

The judge sentenced Escalona to 99 years in jail.