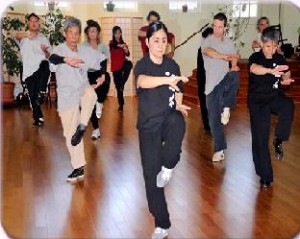 SHANGHAI – Movie star Jet Li has joined up with renowned Chinese Internet entrepreneur Jack Ma to open a t’ai chi school in a bid to promote the traditional exercise.

Ma is founder of the world’s biggest online retailer, Alibaba, where he stepped down as chief executive officer last week saying he wanted to do more in education and the environment.

He is a keen devotee of t’ai chi, and has made references to Chinese martial arts in both business strategy and corporate culture.

Li rose to fame for his kung fu skills and has starred in such films such as the Chinese historical epic “Hero” and the Hollywood blockbuster “The Mummy: Tomb of the Dragon Emperor”.

The school in Hangzhou will teach t’ai chi and martial arts under a disciple of a well-known master, said a statement from Ma’s company provided on Monday.

It is part of a larger development in a wetlands park which includes commercial services, according to the statement.

The film star and the entrepreneur already have a jointly-owned cultural company which provides t’ai chi training to company employees.