Michael ‘Mujaheed’ Adebolaja, a 20-year old British Nigerian is identified as one of the two men who hacked to death a serving British soldier in a street near an army barracks in London yesterday. 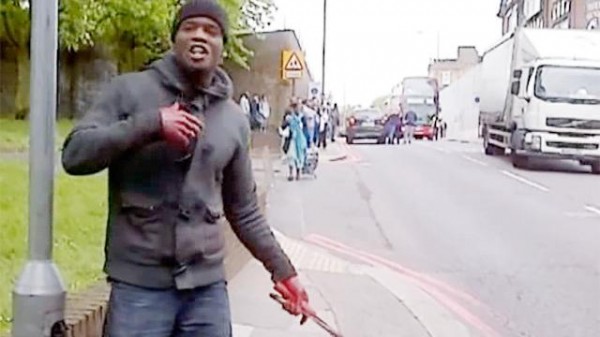 Adebolaja, an alleged a Muslim convert, who answers his Muslim name ‘Mujaheed’, meaning one who fights jihad and goes about preaching the word of God in the last few weeks, was filmed by an onlooker and broadcasted by Britain’s ITV news channel  with hands covered in blood and holding a bloodied knife and praising God for the murder.

In the clip, Adebolaja, looking agitated and angry, said: “I apologize that women had to witness that, but in our lands our women have to see the same thing.

“You people will never be safe. Remove your government. They don’t care about you.”

He could have been referring to Afghanistan, where British troops are part of the international force supporting the Kabul government in its fight against Taliban insurgents.

Prime Minister David Cameron, who cut short his trip to France to chair an emergency national security meeting, said the attack appeared to be a politically motivated attack.

“It is the most appalling crime,” Cameron said. “The police are urgently seeking the full facts about this case but there are strong indications that it is a terrorist incident.”

“We have had these sorts of attacks before in our country and we never buckle in the face of them,” he added.

“That this can happen in the centre of a busy town, it’s really really shocking and traumatizing for everybody, all local residents,” a witness who gave her name as Tenisan told Reuters in a nearby street.

Ahmed Jama, a 26-year-old resident, laid flowers down at the scene as a sign of respect to the families involved.