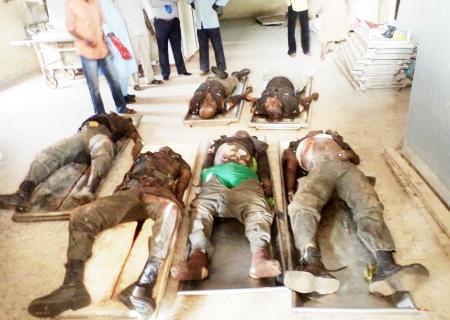 The survival of about ten policemen in Tuesday’s onslaught from the Ombatse militia group in Nasarawa State has been attributed to luck by one of the police officers who spoke on behalf of the other survivors.

Narrating their escape, the officer – (names withheld), said it took the grace of God as they were outnumbered and overpowered by the militiamen. He further disclosed that the militiamen must have had prior knowledge of their coming as they were way-laid on the narrow road leading to the village, Alakyo, where they were supposed to effect the arrest of their leader and recover arms said to be in his possession.

He said, “The road is narrow and they allowed us into their midst before opening fire on us at close range. Efforts to return fire and scare them into hiding ware futile as bullets were not penetrating them”, he said.

Speaking on condition of anonymity, the police officer described the militiamen as dressed in black shirts and caps and kept approaching amidst heavy gunfire, which forced their Hilux van, the last van on the convoy, to beat a retreat.

“Due to the nature of the road and ensuing gun duel, our men could not turn back and 10 of us in our van were able to manoeuvre our way out but not without suffering bullet wounds,” he said.

The officer who is recuperating, added that the driver of their van sustained gunshot wound to the leg but as fate would have it, one of them with him in the front seat could drive and immediately took control of the van.

According to his testimony, many of the officers who escaped into nearby bushes were largely outnumbered by the militiamen who were familiar with the terrain and overpowered them.
“As soon as they killed an officer, his rifle was taken off him.”