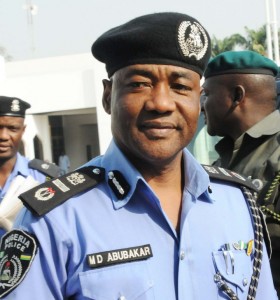 The Inspector General of Police, IGP, Mohammed Abubakar, weekend, shunned Nasarawa State Governor Tanko Al-Makura in Lafia by refusing to visit him after arriving the state for on-the-spot assessment of what led to led to the death of the officers killed in the state.

Apparently angered by the shabby handling of the operation which led to the death of 60 police officers, as the police high command was not even informed about the operations which led to the killing of policemen and operatives of the Department of State Security, by the state police command.

Governor Al-Makura, however went to the police command headquarters to welcome the police boss, and expressed his regret over the killing of the security personnel.

As the governor addressed the police boss, one of the daughters of the slain police officers, whose identity was not immediately known, broke through the security and gripped the governor, wailing and asking him (Al-Makura) to produce her father. It took spirited efforts by the governor’s security details to free him from the little girl.

Addressing Mohammed, the governor said, “You are welcome to Nasarawa State. We are deeply touched by how you feel about your men; how caring you are about your men who were out there to carry out their duty of maintaining peace and protecting life and property in our society.

“On behalf the people of Nasarawa State, I equally sympathize and condole with you and Mr. President and other service chiefs, particularly the Director of DSS over the loss of your active and patriotic men.”

“As a matter of fact I have not been myself since this incident happened because I am a living witness to what the security high command both at the federal and state levels are doing in the country to ensure peace and security. Before I came into power, security challenges had been overwhelming in the state; but through the assistance of your men and their show of expertise, they were able to contain such problems.”