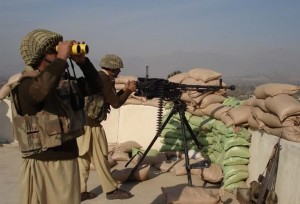 The driver of a NATO supply truck driving through northwest Pakistan near the Afghan border, was on Thursday killed, local officials said.

The shooting took place in the Jamrud area of Khyber, one of seven districts that make up Pakistan’s semi-autonomous tribal belt where Taliban and Islamist militants are active.

There was no immediate claim of responsibility for the killing, but local intelligence and health officials confirmed the killing.

Pakistan is a key transit route for the Nato mission in landlocked Afghanistan, from where it is driven to the border from the Arabian Sea port of Karachi.

Incoming prime minister Nawaz Sharif, who claimed victory in last week’s general election, has promised Pakistan’s “full support” as the United States withdraws most of its combat troops from Afghanistan by the end of next year.