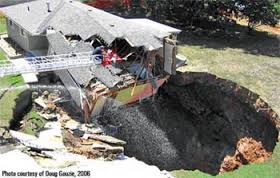 A sinkhole in East Rutherford, N.J., popped up inside a warehouse around 12:30 p.m. Monday and consumed a man and his forklift entirely.

The forklift operator, identified by The Record as Bronx resident Danny Rodriguez, was taken to a local hospital and treated for a back injury.

Emergency personel were on scene to contain the incident, evacuating the building.

Assistant Fire Chief John Giancaspro told NJ.com that officials are still trying to determine the cause of the estimated 40-by-40-foot sinkhole.

Fortunately for Rodriguez, it appears the forklift may have broken his fall. According to NBC News, rescuers said the piece of machinery helped protect him from being crushed during the tumble into the hole.

In April, a massive sinkhole in Illinois swallowed three cars and injured one person on Chicago’s South Side. At the time, Water Department Commissioner Thomas Powers blamed the city’s sewer system and a water main break for the collapse.