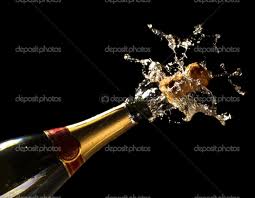 The lyrics to Pop Champagne – one of many Nigerian pop songs to pay homage to the ubiquitous French drink – are self explanatory. “We dey pop champagne, pop pop pop pop, pop champagne!” the song goes, as a nightclub jumps with men holding bottles and women glasses full of bubbly.

But Nigerians’ love of champagne is fast becoming fact as well as legend – with new figures forecasting that champagne consumption in the west African country will reach 1.1 million litres by 2017, with 2011 consumption at almost 8bn naira (£31m).

The figures, from research company Euromonitor, found that Nigeria had the fastest growing rate of new champagne consumption in the world, second only to France, and ahead of rapid growth nations Brazil and China, and established markets such as the US and Australia.

“Champagne has its own demographic on the higher end of things – it’s not even about the middle class, it’s about the elite,” said Spiros Malandrakis, a senior analyst at Euromonitor.

“People may find it surprising that Nigeria came second in the rankings, but it has an extremely extravagant elite, with Nollywood and the oil industry.”

Nigerians’ love of big spending has attracted growing attention in recent months. Last year figures revealed that Nigerian tourists in the UK are the fourth biggest foreign spenders, ringing up an average £500 in each shop where they make purchases – four times what the average UK shopper spends.

“At all the celebrity parties in Lagos, they always have champagne. And it has to be the finest – Cristal, Dom Pérignon or Moet et Chandon rosé – these are the things that are important symbols here,” said Vanessa Walters, the Lagos-based editor of Nigerian women’s magazine Genevieve.

“People say that at every elite event the champagne has to be flowing, and that how much champagne there is is a one-upmanship thing, like showing people that your house is bigger than theirs.”

But not everyone in Nigeria – 63% of whose 160 million population still live on less than $1 a day – is impressed with the extent of Nigerian champagne consumption.

“Nigerians’ unhealthy enthusiasm for anything foreign or imported is a plague that continues to pull the country back into this sort of wasteful expenditure,” said an editorial in Nigerian newspaper the Daily Trust in response to the figures.

“[These figures] reveal the profligacy that is offensive, if not obscene.”