The Supreme Court has affirmed the death sentence passed on a former soldier, Henry Nwokearu, sentenced to death for killing his uncle, Felix Onuoha. 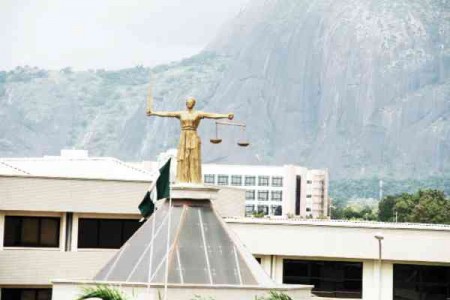 Delivering judgment, Justice Nwali Ngwuta held that the lower court was right when it affirmed the judgment of the trial court that the act of the appellant was intentional.

“I have carefully considered the submissions of learned counsel for the parties as well as the case law relied on by them. It would be unreasonable to conclude that the appellant who stabbed the deceased on the left side of his chest to such depth that the deceased fell down and died did not intend to kill the deceased.

“Appellant was a soldier and knew where to strike to kill. It was a meditated and brutal attack on a defenceless relation of the appellant. It is immaterial that the dagger was not sharpened or that it was sharpened for a purpose other than killing a person or causing him a grievous bodily harm.

“The trial court found, and the Appeal Court affirmed, that there was no prior fight between the appellant and the deceased.

“The evidence of PW3, Ugorji Onyedinma, who is the Secretary of Aladinma, was specific that there was no quarrel between the parties on the day prior to this incident.

“The two issues having been resolved against the appellant, his appeal fails and is hereby dismissed. I endorse the judgment of the Appeal Court, affirming the decision of the trial court,’’ he said.

Mr. Ngwuta, who relied on the three elements of the offence of murder under section 319(1) of the Criminal Code, said it was proven beyond reasonable doubt that the victim died. He held that it was also a fact that the death of the victim was caused by an act of the appellant.

He further held that it was a fact that the act of the appellant that resulted to the death of the victim was intentional.

The appellant was charged with the offence of murder, contrary to Section 319(1) of the Criminal Code. The charge was in accordance with 30 Vol. 2 Laws of Eastern Nigeria applicable in Imo State.

However, the appellant pleaded not guilty to the one-count charge on June 27, 2001. The prosecution in furtherance to the trial had opened the case before Justice J. Agugua on January 14, 2002 by calling six witnesses.

The prosecutor had contended that as a soldier, the appellant was aware of what a dagger could do on the part of human body containing sensitive organs such as lungs and kidney.

According to the prosecutor, the court must consider the action as intentional in the absence of any evidence that the appellant was insane at the material time he carried out the act. Dissatisfied by the decisions of the lower court, the appellant approached the apex court with the appeal.

Mr. Nwokearu urged the apex court to determine if the Appeal Court was not wrong in failing to set aside the judgment of the trial court in the absence of proof of specific intention to commit the act.

He also prayed the Supreme Court to further determine whether the defence granted by Section 24 of the Criminal Code was not improperly denied the appellant by the way the Court of Appeal conducted the trial. In the circumstance, the appellant urged the apex court to determine among other issues, whether the justices of the Court of Appeal were right in upholding the trial court’s decision in the light of evidence adduced.

In his defence, the appellant said that he was compelled to stab his uncle in self-defence, saying it was neither intentional nor pre-meditated.