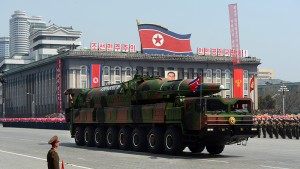 North Korea has moved two missiles from launch sites on the country’s eastern coast, after weeks of concern that Pyongyang had been poised for a test-launch.

A US defence official said on Monday that Washington did not believe the Musudan missiles had gone to an alternate launch site and that they were now believed to be in a non-operational location.

The move coincided with preparations by US President Barack Obama to meet South Korean President Park Guen-hye at the White House on Tuesday, where they will hold talks and have a working lunch followed by a joint news conference.

“I wouldn’t again comment on intelligence. But what we have seen recently is a ‘provocation pause.’ And we think that’s obviously beneficial to efforts to ensure we have peace and stability on the Korean peninsula,” Little told reporters.

North Korea’s move meant there was no longer an imminent threat of a launch, and Pyongyang would have to make preparations before returning to a launch-ready status, two other US officials said.

Amid dire threats and bellicose language from North Korea, two Musudan missiles had been deployed to the east coast, and the United States and its allies Japan and South Korea had braced for a possible test-launch in the run-up to national celebrations on April 15.

US Secretary of State John Kerry warned North Korea last month that it would be a “huge mistake” to launch the medium-range missiles, but the prospects of a test had put Seoul, Washington and Toyko on edge.

Japan and South Korea stepped up its missile defences, while the US military deployed two destroyers equipped with anti-missile weapons and a powerful radar to the area to thwart any possible launch.

Commanders told MPs US forces would be ready to shoot down any missile that threatened allies or US facilities in Guam.

But North Korea never launched a missile and eventually toned down its inflammatory rhetoric, with the crisis appearing to ease in recent days.

A Musudan missile has an estimated range of roughly 3,000 to 3,500km, according to military officers.

North Korea has several hundred short and medium-range missiles available that could reach targets in Japan or South Korea, according to the Pentagon. [AlJazeera]