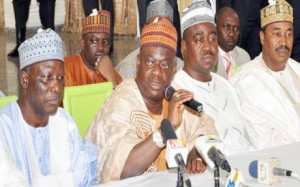 The Northern State Governors’ Forum has said it was in support of the state of emergency imposed on Borno, Yobe and Adamawa in the North-East.

The Chairman of the forum and Governor of Niger State, Babangida Aliyu, said this in a statement through his Chief Press Secretary, Danladi Ndayebo, which was made available to the News Agency of Nigeria.

The NSGF however expressed hope that the imposition of emergency rule would complement the Federal Government’s offer of amnesty earlier made to members of the Boko Haram sect.

“We feel this will help to restore peace to the affected states,” the forum said.

The Northern governors however urged all members of security agencies deployed to the affected states to operate by their rules of engagement.

“We advise the military to respect the sanctity of human lives, especially civilians who are not involved in the crisis,” they said.

The governors also called on the people in the affected states to co-operate with military personnel posted to their areas to avoid unnecessary loss of lives and destruction of properties, and also urged members of the Islamist sect to accept the gesture of amnesty.

“They should respond to government’s gesture so that lasting peace can return to the region in particular, and the nation in general,” NSGF said.

The forum also commiserated with families of those who lost their loved ones in an attack by gunmen in Daura, Katsina State on Thursday.