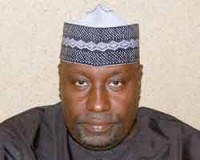 The war of words between the North and Niger Delta campaigners for President Goodluck Jonathan’s re-election in 2015 continued yesterday with a former member of the House of Representatives, Farouk Adamu Aliyu, boasting that the north would ensure that Jonathan does not return to power through their enormous voting strength and not through the barrels of the gun.

Addressing a news conference in Abuja, Aliyu, a former minority leader in the House of Reps expressed regret that Jonathan had allowed his kinsmen to insult and intimidate the rest of Nigerians because of his 2015 ambition.

Describing himself as one of those who berthed the Jonathan Presidency with the Save Nigeria Group, Aliyu wondered where the likes of Asari Dokubo and his cohorts were when opposition mounted against the President’s inauguration as acting president.

In the conference text entitled, “Ungrateful President and his people”, Aliyu chronicled the different selfish actions and utterances by Jonathan since his ascension to the highest office in the land which showed that he was more interested in the welfare of the Ijaws than other Nigerians.

Apparently angered by the actions of the President, Aliyu pointed out that unlike in 2011 when the people of the area rejected their own and voted massively for Jonathan, he said the table would turn in 2015 as a lesson that a Nigerian leader should not be sectional or tribalistic in the administration of the nation.

“We call on President Jonathan to dissociate himself from those who are beating the drums of war and to call them to order so as not to truncate the democratic governance in Nigeria, which all Nigerians fought for.

“We know that it is only the President of a country that can boast that nobody can arrest him and nothing happens. But now, some people are threatening the law enforcement agencies and the National Assembly to dare arrest them and see what they will do without the President saying anything.

“As at today, we are all Nigerians and the President has the responsibility to treat us as Nigerians. But we are worried that he has kept mute over those planning genocide, hatred and destruction of lives and property because of their selfish interest.

Aliyu dismissed Chief Edwin Clark’s statement that nothing would happen if Jonathan loses in 2015, saying the Ijaw leader was one of the problems of Nigeria.

According to him, Clark has not done as much as he has been doing to bring about peace and unity in Nigeria.

On the threats by Niger Delta militants that they would stop the flow of oil through the pipelines to all parts of Nigeria should Jonathan lose out in 2015, Aliyu emphatically declared that no one region or ethnic group could lay claim to the oil resources as it belonged to all Nigerians.

“As long as we remain as Nigerians, we shall stake claim to the oil resources just as other Nigerians are benefitting from the mineral resources found in Jigawa or Sokoto State.”