The driver of the Mercedes Banz 200 saloon car, Mr. Osita Nnewuihe, who allegedly rammed his vehicle into the staff car of Imo State governor, Chief Rochas Okorocha, was yesterday given N200,000 cash to repair his car. 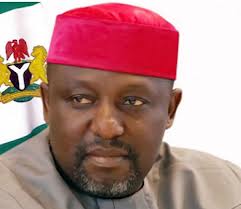 Doling out the money, yesterday, at Government House, Owerri, Chief Okorocha said Nnewuihe was a former councillor in Oru East Local Council Area of the state.

He thanked God that nothing serious happened to the young man, stressing that he ran into the governor’s convoy unknowingly.

“The young man was arrested and detained by the police for about one week before I gave an order that he should be released from detention,” Okorocha said.

The governor said he was “back, strong and healthy” and thanked Imo people for remaining peaceful and prayerful since he left the country for medical treatment oversea.

He called on road users to be very careful about the way they drove and declared that Nnewuihe had become his personal friend.

Speaking also, Mr. Nnewuihe expressed happiness that nothing serious happened to the governor and wished him well.