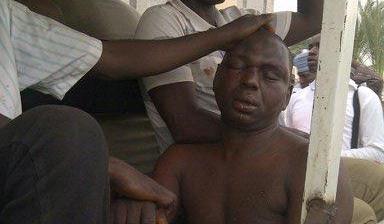 The police corporal, arrested and beaten last Friday by a team of detectives after he was found out as the mole that allegedly tipped off the Eggon militia group – Ombatse, which led to the murder of over 100 policemen and other security operatives in Alakyo in Nasarawa State, is still in coma.

A team of detectives had last Friday nabbed two corporals of Eggon origin they arrested over suspicion that they leaked the details of a security operation to the suspected cultists.

The principal suspect, simply identified as Corporal Enugu, was driven to Government House, Lafia unconscious, and had bruises all over his body including his head; a sign that he must have been tortured. He and his associate, Corporal Haruna Joseph, were paraded.

Police sources said the corporal was still unconscious as at yesterday, although a team of doctors are said to be working round the clock to bring him back to consciousness.