A suspected bomb attack on a new Catholic church in the northern Tanzanian town of Arusha killed at least one person and wounded dozens of others on Sunday, police said. 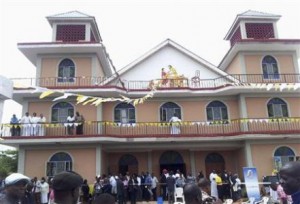 The Vatican’s ambassador to Tanzania, Archbishop Francisco Montecillo Padilla, was attending the official opening of the church when the explosion occurred, but escaped unharmed.

If a bomb blast is proven, it will mark an escalation in sectarian tensions in east Africa’s second biggest economy.

“Some kind of explosion went off at the church. It is believed to have been a bomb but we don’t know what type of bomb it was,” police spokesperson Advera Senso said.

One person was arrested after the blast, which killed a woman and wounded 57 other people, Senso said.

A Vatican embassy official said he had been in contact with Padilla. “He is personally fine,” the official said.

Two Christian leaders were killed in Tanzania’s semi-autonomous, predominantly Muslim islands of Zanzibar earlier this year and there have been attacks on Muslim leaders and mosques. Arusha lies near the snow-capped peak of Mount Kilimanjaro in a part of Tanzania that is predominantly Christian. [Reuters]