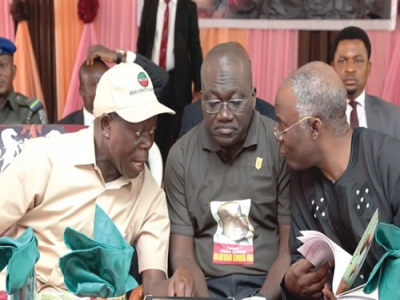 Funke Oyerinde, widow of slain former private secretary to the Edo State governor, Comrade Adams Oshiomhole, the late Comrade Olaitan Oyerinde, was full of emotions as she rained curses on the killers of her husband during the first anniversary to mark his death in Benin City on Monday.

Pointing at her son, Adams Oyerinde, she said “they have killed Olaitan, but Olaitan is here,” adding that she lost her mother the same year she lost her husband.

Information Nigeria reports that the late Oyerinde was shot dead by assailants in his Benin City home on May 4, 2012 and since then; Governor Oshiomhole has not stopped accusing the Police of having a hand in the unresolved assassination of his principal secretary.

In his tributes, Oshiomhole said “we have a duty to keep the memory of Olaitan alive. Olaitan was a man of uncommon vision and clarity; he was a very selfless worker.

According to him, “I am happy that one year on the fighting spirit is on and people have asked me why I talk in this way and manner. Some say I don’t talk like a governor when it comes to Oyerinde’s matter. How is a man supposed to talk when a man is mourning? Is my office and indeed the life of any Nigerian as important as the life of a Nigerian?”

The guest speaker at the anniversary which held at the Imaguero College, Mr Femi Falana (SAN), called on the Attorney-General of the Federation (AGF), Mohammed Adoke, to publicly apologise to Oshiomhole for what he called a misleading statement that the office of the AG did not give legal advice to the police with regards to state offences.