Geoengineering would have been more interesting, if it is artificial solution to common environmental issues, s 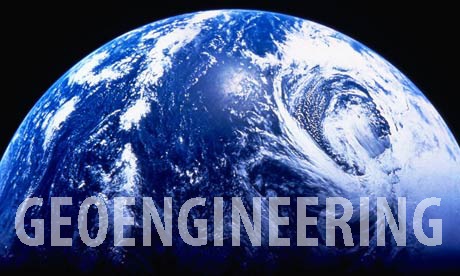 uch as floods, erosions, drought, blizzards, avalanche, storms, etc. But Geoengineering is not. Geoengineering is directed at reducing factors responsible for some of these extreme conditions – Global Warming.

Geoengineering, a phenomenon used to describe sets of technologies to reduce solar radiation reaching or absorbed by the earth and technologies to remove carbon dioxide in the atmosphere, is seen a lesser option – known – to manage global warming.

Geoengineering has possibilities and risks, and gets introduced to the rest of the world by scientists, policy makers and interest groups. Geoengineering aims at instrumental factors for global warming, which is intense solar radiation and carbon dioxide – an abundant greenhouse gas. Geoengineering doesn’t go after the ultimate effects of global warming, as mentioned above, making the subject and its hard technologies strange – to many who have heard about it.

The weirdness of geoengineering also extends to the interdependence of its outcome on territories aside the territory of deployment. It could cause droughts, deluge, avalanche, etc. in other places and may lead to conflict if no agreement was made before proceeding with such. Geoengineering has been measured with possibility for solutions, but there are no real-world tests to prove, and chances for reversal are slim, should things go wrong.

If geoengineering is deployed for global benefit, it would favor some continents and may cause issues in others. Affected continents may include the developing world, putting them in more trouble. Take Africa, a continent dubbed as most affected for climate change that, clamors in international meetings for action, may suffer enormous consequences – for geoengineering, if deployed.

Africa wants geoengineering – the kind that’ll attack the effects of extreme weather – not the causes. Africa has its changing climate, and its developmental challenges. Africa seeks assistance, but received funds do not match demands. Innovation and research that would be useful as solutions to Africa’s environmental issues are scarce. And in Africa, especially for governments, resources aren’t abundant.

These makes Africa special amongst continents. Geoengineering meetings have been held twice in Africa, but there have been several climate change meetings. Discussions – regarding these – have not changed but time and opportunities ahead should not follow similar paths. Africa should evolve itself into technology design, development and deployment, with the academe at the fore, courting foundations or financial houses to bankroll the social business initiatives.

Initiatives that would control floods, erosion, and find realistic ways out during drought, harmattan, etc. Africa should also be assisted by international organizations for networking, knowledge sharing, research, etc. Geoengineering already has some might, its technologies are insightful and can be useful to inspire technologies that would aim at the immediate effects of climate change – especially in Africa.

Technology to Africa – is a great sell, seen in mobile and growing internet penetration around the continent. Africa is open to great technologies, solutions and innovation, and developing a culture of pioneering stuff locally. Geoengineering Africa’s Climate Change, a draft note that looks at Africa, geoengineering and climate change, details how Africa can seek technologies for environment solutions.