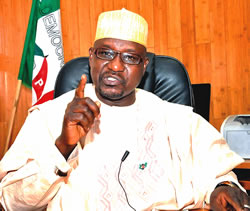 The Presidency has described as reckless and irresponsible statements credited to opposition political parties on the mid-term performance of President Goodluck Jonathan on Democracy Day.

Special Adviser to the President on Political Matters, Dr. Ahmed Gulak, said contrary to the stance of the opposition parties, the President had achieved so much in the two years of his administration.

Gulak said, “The ANPP, ACN, Congress for Progressive Change and other political parties are just making statements that are reckless and irresponsible.

“Have governors of ACN, CPC or ANPP states presented mid-term report to the people of their states? The answer is no.

“This is the first time in history that a President will present his mid-term report to the people of the country. He told Nigerians in clear terms what he has done in the last two years.

“President Jonathan’s achievements are facts and verifiable. They are there for all to see, they are not rhetoric.

“Nigerians should be the ones to be talking and not the ACN and others that will never see anything good in this administration. That was why he said Nigerians who want to assess him should design their marking scheme.”