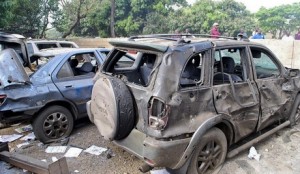 No fewer than 21 people have been killed after suicide bombers in Niger detonated two car bombs simultaneously, one inside a military camp in the city of Agadez and another in the remote town of Arlit inside a French-operated uranium mine, the ministry of defence said.

Several dozen people were also injured in Thursday’s attacks, which were claimed by the Movement for Oneness and Jihad in West Africa (MUJAO), as revenge for Niger’s involvement in a French-led military offensive in neighbouring Mali.

Twenty people were killed in the desert city of Agadez, located almost 1,000km northeast of the capital, where the attackers punched their explosive-laden car past the defences at a military garrison and succeeded in entering the base, said Minister of Defence Mahamadou Karidjo.

After a fierce gunbattle, security forces returned the town to calm but one attacker was still holding soldiers hostage, military sources and local officials said.

“We heard a strong detonation that woke the whole neighbourhood, it was so powerful,” Abdoulaye Harouna, a resident of Agadez, said. “The whole town is now surrounded by soldiers looking for the attackers.”

Further north in Arlit, a car bomb struck at the Somair uranium mine operated by run by French nuclear group Areva.

Areva said one person was killed in the attack and 14 others injured.

Niger officials said crushing and grinding units had been badly damaged at the plant and uranium production had stopped.

The MUJAO, one of the groups which seized control of northern Mali last year before being driven out by French-led troops, claimed the near simultaneous bombings.

“Thanks to Allah, we have carried out two operations against the enemies of Islam in Niger,” MUJAO spokesman Abu Walid Sahraoui told the AFP news agency.

“We attacked France and Niger for its cooperation with France in the war against sharia [Islamic law].”