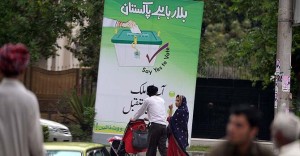 Pakistan’s historic general elections witnessed attacks across the country, which led to the death of 18 people, as Polling stations closed at 6pm (1300 GMT).

Officials reported a “huge” turnout in the largest province of Punjab.

“The election commission of Pakistan was successful in conducting the elections. We have a huge turnout in Punjab,” commission secretary Ishtiaq Ahmad told a news conference, confirming that polling stations would close at 6pm.

Polling stations will be open for elections until 1500 GMT in seven Karachi constituencies where stations opened late, officials have said.

Ahmed said the turnout across the country was “very good” in general.

Accusations of election malpractices between supporters of rival parties was part of the common incident during the election, particularly in Karachi where Islamist party Jamaat-e-Islami boycotted the poll after pointing the finger at Muttahida Qaumi Movement (MQM), which controls the city.

Commission secretary, Ahmad said concerning alleged fraud that, “We will not hide anything. If we have a complaint from any polling station, we will take notice of it. Rest assured, there will be no compromise on the transparency of the election.”

Meanwhile, bomb attacks killed 12 people in Karachi while gunmen shot dead six in the restive southwest, as the election commission extended voting by an hour nationwide amid a high turnout estimated to be up to 60 per cent.

Bombs also went off in the northwest, the part of the country most troubled by Taliban insurgency for almost seven years, wounding 12 people.

More than 86 million people are eligible to vote at 70,000 polling stations for the 342-member national assembly and four provincial assemblies in Khyber Pakhtunkhwa, Punjab, Sindh and Baluchistan.

The election marks the first time that an elected civilian administration has completed a full term and handed power to another through the ballot box in a country where there have been three military coups and four military rulers.