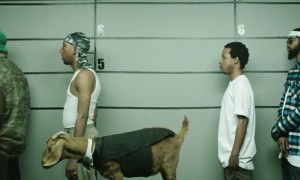 PepsiCo has pulled an offensive Mountain Dew ad after it was dubbed ‘the most racist commercial in history.’

The ad, which has also been criticized for promoting violence against women, shows a white female assault victim, battered and on crutches, at a police station, as she is asked to identify her attacker out of a line up of five black men and a goat.

The culprit, the goat, named Felicia, threateningly dissuades the victim from pointing him out to police as a white detective tells her to ‘nail this little sucker.’

It wasn’t long before the ad sparked a furor online, with one social commentator, Dr. Boyce Watkins, describing it as ‘arguably the most racist commercial in history.’

‘Mountain Dew has set a new low for corporate racism,’ he writes on his blog Your Black World.

‘Their decision to lean on well-known racial stereotypes is beyond disgusting. This doesn’t even include the fact that the company has put black men on par with animals.’

The ad was part of a series developed by African-American rapper Tyler, The Creator.

Responding to the complaints, PepsiCo says it immediately removed the ad from all Mountain Dew channels and requested Tyler to do the same. It was, however, still available on certain individual YouTube accounts.

The company said: ‘We understand how this video could be perceived by some as offensive, and we apologize to those who were offended.’

Attempts to view the advert result in the message: ‘This video is no longer available due to a copyright claim by PepsiCo.’