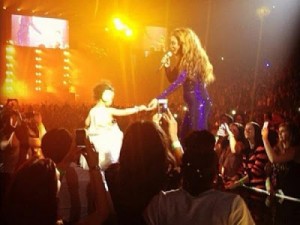 “I am very protective,” Beyoncé told ABC News during the London leg of her tour. “I just want to make sure that [Blue Ivy] can have a healthy, safe, normal life. … In the back of my mind, she’s my priority. And life is completely different now.”

She added, “I feel really, really just lucky that I can still do what I love, and now have a way bigger meaning. And that’s to be her mother.”

In fact, Blue Ivy may one day be a big sister, according to the singer. “I would like more children,” she said. “I think my daughter needs some company.”

The Mrs. Carter Show world tour has been a family affair with dad Jay-Z on the road, too.

In March, Beyoncé showed off a pair of matching director chairs for herself and her daughter.

As the diva belted out her hit “Irreplaceable” at London’s O2 Arena on Saturday, daughter Blue Ivy Carter appeared briefly on stage, wearing an adorable white dress and sporting large protective headphones, according to a YouTube video posted on Vibe.com.