A woman, Sakirat Attah, 25, has been arrested by the police at Elemoro Division, Lekki, Lagos, southwest Nigeria, for severely scalding her son’s face. 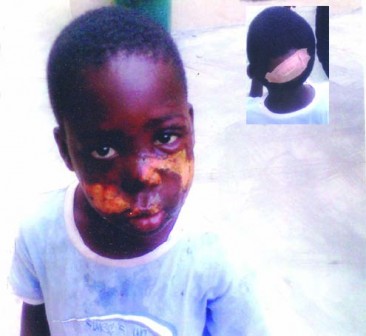 Little Daniel with scalded face. Inset… Injury inflicted on his head by his mother

The petty trader who resides at Abijo village in Ibeju Lekki, allegedly carried out the dastardly act while punishing little Daniel for licking their neighbour’s soup.

It was gathered that Sakirat also used a broken bottle to stab Daniel in the head during her fit of anger and he sustained a deep cut in the head.

A police source said that the victim’s neighbours rescued him from the mother and quickly rushed him to a nearby hospital due to excessive loss of blood.

The trouble started for the little boy when their co-tenant allegedly caught him licking their pot of soup and reported him to his mother.

The mother of the child was said to have dragged her son inside her room and locked the door.

She allegedly lit her stove and put an iron spoon on it to get hot and used it to burn her son’s face and hands as punishment.

It was also gathered that when the little boy was not cooperating with her, she allegedly broke a bottle and stabbed him in the head before neighbours who allegedly heard the boy crying for help entered the woman’s room and rescued him.

During interrogation, the little boy allegedly admitted licking the soup because he was seriously hungry since his mother did not provide food for him to eat on time. The neighbours, it was learnt, reported the matter to the police who arrested the woman.

During interrogation, she allegedly admitted scalding her son with hot spoon to teach him a lesson not to steal again, adding that she did not know that the torture would cause the boy such injuries.

After investigation, she was charged before an Igbosere Magistrate’s Court, Lagos on a one count charge of assaulting a minor occasioning bodily harm. The offence, the prosecutor, Supol E. C. Ekuma said, contravened section 171 of the Criminal Law of Lagos State, 2011.

The accused pleaded not guilty to the charge and the presiding chief magistrate, Mrs. Femi Segun admitted her on bail in the sum of N100,000 with two sureties in like sum with proof of two years tax payment to the Lagos State Government.

She also directed that one of the sureties must be a blood relation, while the other must be a community leader.

She adjourned the matter till 27 June, 2013 for mention. The defendant was, however, moved to Kirikiri Prison, Apapa, pending when she would fulfill the bail conditions.