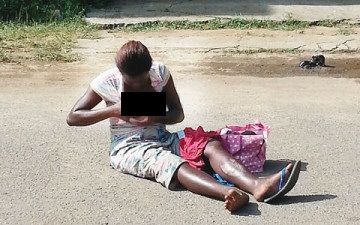 In a desperate attempt to draw attention to her misfortune, Esther Odozi, 21, bared her breasts on Monday on the premises of Ikeja Magistrate’s Court as she protested against hunger that was “killing her and the five children” she left back home in Agbor Owanta, Delta State.

Odozi laid half-naked on a road in the court shouting, “Hunger, hunger. Government must do something today. I have not received anything from the plenty crude oil money government is spending in our state. Nigerians are wicked.”

She impeded movement on the premises. Passersby were astonished. One of them, who did not state her name but said she was a lawyer, told our correspondent that Odozi abused the “temple of womanhood.”
Odozi shunned passersby who shouted at her to cover herself as she rolled on the ground. She revealed wounds on her left leg and the right side of her hips; she said she was hit by a car. She refused a N500 given to her by a passerby, saying, “I don’t want your money. I want Fashola to give me N200, 000.”
When our correspondent approached her, she said, “After confronting serious hardship in my state, I was advised by an official of Human Rights Commission in Delta to go to Human Rights Commission in Abuja. I also went to Police Headquarters and NAPTIP (National Agency for the Prohibition of Trafficking in Persons) in Abuja. They all told me to go to Lagos; they said that is where I could get help.”
“My husband, Donald Ogbaja, was a retired policeman before he died of hunger. He married me when I was 17. I bore five children, including twins for him.”
Odozi said she tried to survive on her own by cultivating some crops. She, however, said she was hit by a car and had been hindered by her injury to continue working on her farm.
She said, “I will not leave this court without seeing N200,000 to start business. I want to sell melon and garri. Tell Emmanuel Uduaghan, the governor of my state, and the Federal Government to do something about my condition. They must give me part of the petrol money. I must take care of my five children.”
When she was asked that as a young woman, didn’t she feel ashamed to bare her breast? She answered, “I don’t have anything and I don’t have anything to hide anymore.”
Source: Punch
Share
Facebook
Twitter
WhatsApp
Previous article5 Yemenis Executed In Saudi Arabia, Bodies Displayed
Next articleMuslims Jailed For Killing Buddhist Monk In Myanmar
- Advertisement -