A woman is accused of shooting her boyfriend while he was hooked up to a dialysis machine at a hospital. 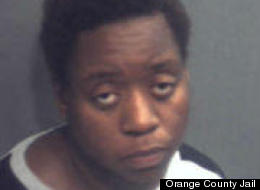 Shemira Hargrove, 32, has been charged with attempted murder, the Orlando Sentinel reports. Witnesses say Hargrove shot her boyfriend point-blank in the stomach at around 9:30 a.m. Monday at the Florida Dialysis Center.

“[A] lady walked in and shot the man while on the table,” witness Josie Clark told WFTV.

Orlando Police Sgt. Diego Toruno told the station, “It appears there was an argument and at one point the victim was shot.”

While being led out of police headquarters, Hargrove apologized for the incident, according to Click Orlando.

Hospital staff worked quickly to aid the victim and keep other patients out of danger.

“Everybody got out from the lobby and there was a little lady at the door and a guy said, ‘Come with me, they’re shooting,'” witness Ramon Pabon told WFTV.

Hargrove is now in jail, while her boyfriend is recovering from surgery.