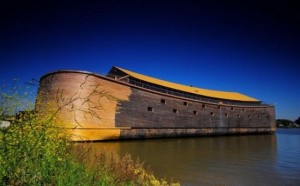 Inspired by Noah’s Ark from the Book of Genesis, Dutch artist Johan Huibers built a modern day replica spending a whopping $1.2 million on it. His reasons for building the vessel  – he feared the effects global warming would someday have on his country, flooding included. The idea came to him in 1992, when he had a dream about his native land submerged in a flood similar to the one in the Book of Genesis. He continued to think about it until he finally did something about it. And the result is a 130m long, 29m wide, 23m high ark that he completed in 2005. Weighing almost 3000 tons and built from Swedish pine reinforced with steel, it is quite hard to believe that ark might be seaworthy at all, but this modern-day Noah assures us it does indeed float.

A carpenter by profession, Johan Huibers has now opened his full scale ark to the public and is attracting thousands of tourists from the world over. Located in Dordrecht, the Netherlands, the ark is something that would even surprise Noah, for it has a restaurant, two cinemas and of course, a menagerie of life-sized plastic animals. Towering over the flat Dutch landscape, the ark is easily visible from a nearby highway. Across the arks main hold is a huge space of stalls, where visitors can view a large collection of stuffed and plastic animals like zebras, gorillas, lions, tigers, bears and buffaloes.

There’s also a petting zoo, where less dangerous real-life animals like dogs, sheep, rabbits, ponies and a few exotic birds are housed . On each level of the boat, around its edges, are displays about the history and dress of the ancient Middle East, a few scenes from the life of Noah, and games for kids like water pumps and levers that lift bales of hay. But the ark is not just about tourist attractions. Down below, there exists a honeycomb system of hatches, each opening an area where food could be sealed in for long-term storage. The curvature of the upper deck could be used to collect rainwater and also to let the horses and other animals get some exercise. Huibers says that his boat gives people a pretty good idea of how Noah’s ark would have worked in practice.

Jojan first built the half-scale version in 2004 and let it float over the country’s canals, before the larger one was complete. When tourists flocked to see the prototype which was open to public, the proceeds went directly into funding the full-scale version. According to the original story, the ark was supposed to be 300 cubits long, 50 cubits wide and 30 cubits high. It’s hard to interpret this ancient system of measurement, but Huibers did it based on the length of the forearm, determining that the final length had to be maybe about 450ft long.

Over half the length of the Titanic, this modern-age boat is called the ‘Johan’s Ark’. Huibers completed the mammoth task with the help of his two children and some friends. He says that his motivation was ultimately religious, wanting to make people think about their purpose on Earth. “I want to make people question that so that they go looking for answers.” The city of Dordrecht might just need the ark sometime in the future, given that it is quite prone to floods. One of the world’s deadliest floods occurred here in the 15th century, claiming about 10,000 lives.

Let’s just hope nothing like that happens anytime soon, and if it does, perhaps Johan’s Ark could save everyone. Meanwhile, he’s dreaming of a new project – to get the Israelis and Arabs to cooperate and build a water pipeline from the Mediterranean Sea to the Dead Sea. Well, now THAT would be a miracle of biblical proportions.