PHOTOS: Chinese Company Boss Has Employees Crawling on Their Knees in Public 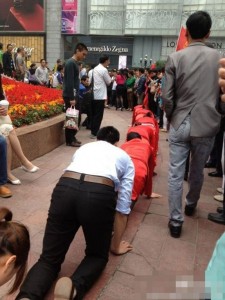 You thought your boss was bad? He’s probably a nice guy compared to the boss of this cosmetics company in Chongqing, China, who recently forced his employees to crawl on their hands and feet in the city’s busy commercial district, in front of hundreds of onlookers. The controversial event took place on May 2nd, and broadcast live on many Chinese users’ microblog accounts. Later, photos taken by bystanders showing the humiliated employees crawling on their knees with their heads facing the pavement were posted online, causing even more outrage. Some people even notified the police, who showed up on scene and cleared the area. It turns out it was all just a drill ordered by the company boss, who wanted to test his workers’ resistance to pressure. And what better way to do that than have them crawl like dogs in front of strangers taking photos and laughing at them, right? Most likely, he wanted to see how much humiliation his employees were able to bear, so he could exploit them to the maximum without them quitting. If something like this happened in a Western country, the boss would probably be taken to jail or at least sued for damages, but according to Chinese media reports, all the police did in this case was “criticize” and “educate” the cosmetic company’s leadership. Inhumane working conditions all over China have been reported in the past, but this is just borderline slavery. Just last week we wrote about the employees of a US real estate agency who willingly tattooed the company’s logo on their bodies in order to receive a 15% permanent raise. I thought that was controversial, but it pales in comparison to this humiliating display. “This boss is finished! His good intention has ruined the name of his company! Such low behavior, how did he come up with something like this?! What would the customers feel if they saw this,” or “This is one of the steps towards making employees into slaves–—in the eyes of the boss, employees are simply slaves” are just some of the comments that describe Chinese internet users’ reactions to the event.