wo men allegedly hacked a soldier to death while shouting ‘God is great’ in Arabic before being shot by police marksmen in a London street today. 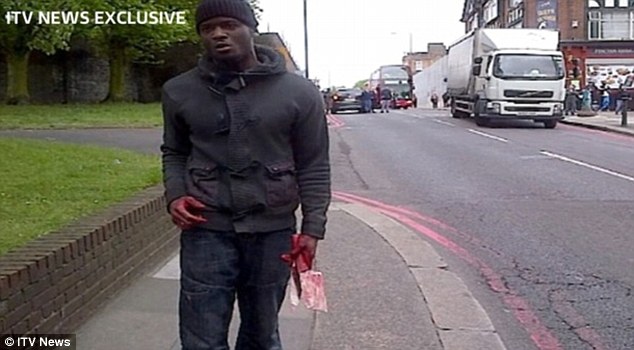 Terrified eyewitnesses told how the victim was subject to a sustained and brutal attack by the armed men after a car crash just 200 yards from Woolwich Barracks in south-east London.

Theresa May tonight called a meeting of the Government’s emergency Cobra committee in response to the machete and knife attack on the man who was wearing a Help for Heroes t-shirt.

The Home Secretary said she had been briefed on the killing by the head of MI5 and police later confirmed they were treating the incident as a possible terror attack.

The two men who carried out the attack apparently shouted ‘Allahu Akbar’, which means ‘God is great’ in Arabic, and tried to film the attack, the BBC’s political editor Nick Robinson said.

It is thought that the two men waited around for 20 minutes until police arrived and then tried to attack them – but were swiftly shot by armed officers including one woman.

Eyewitnesses said the ‘crazed’ men, aged in their 20s, launched a ferocious attack and were ‘hacking at him, chopping him and cutting him.’

Prime Minister David Cameron said on Twitter that ‘the killing in Woolwich is truly shocking – I have asked the Home Secretary to chair a Cobra meeting.’

This afternoon the area’s MP, Nick Raynsford, told BBC Radio 5 Live he believed the victim, a man aged in his 20s, was a serving soldier.

The man is believed to have been hacked to death after a car crash. The scene of the attack is just 200 yards from Woolwich Barracks.

Mr Raynsford said: ‘We think a serving soldier was the victim. We don’t know the circumstances surrounding the incident. We do know a number of weapons have been seized.

‘They include a gun, various knives, and a machete, apparently. The police clearly had to take action in order to try and arrest these individuals.’

The Ministry of Defence said it was urgently looking at the reports that the incident involved a soldier but had no further comment.

A London Ambulance Service spokesman said one man had died at the scene.

He added: ‘Our staff treated two others. Both men were taken to hospital, one of them is in a serious condition, the other is not.’

One witness, identified as James, said he and his partner saw two black men attack the young victim with knives, including a meat cleaver. ‘They were hacking at this poor guy, literally,’ he told LBC.

Luke Huseyin, 32, who lives in a block of flats on John Wilson Street, Woolwich, close to where the incident happened said he watched two men murder a man before being shot.

He said: ‘I was at home and heard a big bang. I looked out of the window and saw a car had crashed.

‘It was a blue Vauxhall. Then two black guys got out of the car dragging a white guy across the road towards the wall. One of the guys had a knife that looked about a foot long and a machete and the other bloke had a gun.

‘They started slashing him up with the knife and hitting him in the stomach with the machete. I don’t think it took long before he was dead. There were people passing by who were screaming and running away. I’ve never seen anything like it.

‘I’m still really shaken up. When he was dead, they dragged him out into the road and left him there.

‘It was strange, they didn’t run off, they just stood there as if they were waiting for the police.

‘It must’ve taken about 20 minutes for the police to arrive, I think it must’ve been because they were waiting for armed police.

‘The police officers got out of the car and the two black men ran towards them with the gun.

‘The police shot them. They fell to the ground. Then a helicopter landed. Think it must’ve been an air ambulance.

‘The paramedics got out and I think they were working on the two men to try and keep them alive.

@Boya Dee witnessed the beheading and shared what he saw on his Twitter page.