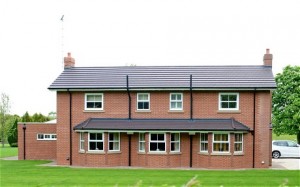 An “incompetent” plumber caused a gas explosion which blew a mansion off its foundations and left the wealthy owner and his wife badly burned, a court was told.

Workman Daniel Hickling, 32, caused the blast, which was likened to a “jet aircraft crashing”, after allegedly botching a job by leaving a hole in some piping.
A Lincoln Crown Court hear it led to gas leaking into the luxury Lincolnshire home of Martyn and Teresa Moody, seriously injuring them.
Hickling cut off and capped the protruding pipe and then buried it under the floor during the conversion of a former kitchen into a dining room.
But he punctured the pipe and failed to carry out a straightforward test which would have located the leak, it has been claimed.
Hours later, the Moodys smelt gas and began searching their purpose-built mansion, located in the pretty hamlet of Nettleton in the Lincolnshire Wolds.
While checking out one of the rooms, Mr Moody flicked on a cigarette lighter and the flame ignited a massive explosion which rocked the house.
The blast had such force that the entire building moved an inch. The windows and front door were blown out and the ground floor of the home was severely damaged, with debris thrown 100 yards away.
Mr Moody, 63, who had recently sold his own construction and electrical business, spent two weeks in hospital after he suffered serious burns to his hands, arms and scalp and had to undergo skin grafts. He has been left scarred for life.
His wife Teresa had burns to her legs and feet and was released after two days in hospital.
The large detached home, which the couple had built for themselves back in 1993, was so badly damaged that it had to be virtually completely rebuilt and it was a year before the couple were able to move back in.