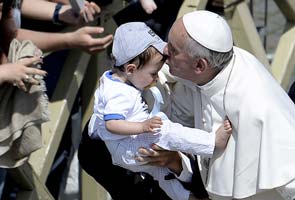 Pope Francis has created the first saints of his papal reign, canonising the first Colombian saint, the second female Mexican and 800 Italian Christians who refused to convert to Islam and were killed by Ottoman Turks in the 15th century.

Thousands of faithful gathered on Sunday in St Peter’s Square to attend the Mass in which he formally bestowed the sainthoods, which had been approved by Francis’s predecessor Benedict XVI.

The new saints include Italian cobbler Antonio Primaldo, who was killed along with an hundreds more Italians, who remain anonymous, in 1480 by Ottoman forces for refusing to convert to Islam.

“While we venerate the martyrs of Otrante, ask God to support the many Christians who still suffer from violence and give them the courage and fate and respond to evil with goodness,” Francis said.