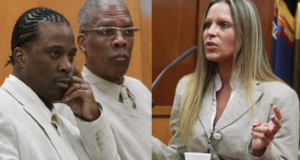 Prostitute Danielle Geissler, 31, took the stand on Tuesday to defend her pimps Vincent George Jr., 33, and his father, Vincent George Sr., 55, who both face charges of sex trafficking, reports NYDailyNews.com.

“I love him … He’s a good father,” said Geissler, who has an 8-year-old daughter with George Jr. “We slapped each other around sometimes but never over work or staying in the life.”

Geissler said the abuse happened when she wasn’t sexually satisfied.

She has reportedly been a prostitute for George for 14 years and claims that when she couldn’t “get it” she would “hate the world.”

Heather Keith, 28, another prostitute in the George “stable,” has “King Kobe,” George Jr.’s nickname, above a bar code tattooed on her body. Though prosecutors attempted to use that as proof of sexual enslavement, Keith claims that wasn’t the case.

“I got it because I cared about him, I loved him,” said Keith. “It was my way to show we were together.”

Keith, Geissler and three more prostitutes protested outside of a Manhattan courthouse wearing matching tees with the words, “We are not victims!” scribbled on the chest. They also chanted:

“We are a family! And we are all proud to be Georges!  It’s a prostitution revolution!”

Even though the women admitted to being held in financial bondage, defense attorney Howard Greenberg said they were free to come and go as they pleased and that the work was harmless.

“The women, simply put, worked as hos because they wanted to,” he said. “Of course they’re promoting prostitutes … what’s the big deal?”

Both men are accused of using a music recording company and a livery car service to launder millions of dollars for their alleged prostitution business.