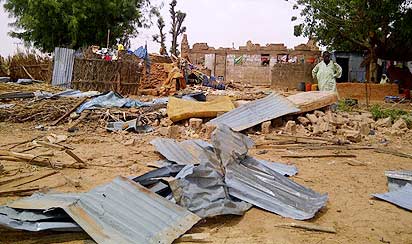 The affected structures include residential houses and public buildings like the court and schools.

Alhaji Tijjani Lawal, the council’s Transition Committee Chairman, told newsmen after inspecting the affected areas on Monday that the incident occurred in the night on May 19.

Lawal said a committee had been constituted to verify the extent of the damage, adding that a relief package would be distributed to the victims.

According to him, the council has provided the victims with temporary accommodation pending the intervention of the state and federal governments.

He described the incident as the will of God, and cautioned people against indiscriminate refuse disposal as well as blocking water ways.

He said such acts were responsible for environmental pollution.

The chairman emphasised the need for collective efforts to protect the environment, urging residents to refrain from indiscriminate felling of trees.

Lawal also advised them to cultivate the habit of tree planting and nursing to check desertification.