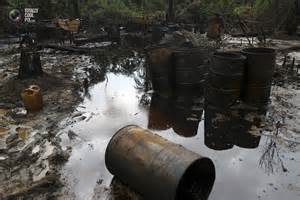 A raid on oil thieves in Udu Creek, Delta State, by naval men left them scampering for escape, leaving behind 150 drums of illegally refined diesel.

“The seizure was made by my men on Thursday, we acted on a tip-off, but they fled before we got there, so it was an abandoned seizure.”

According to him, following the zero level tolerance for oil theft, pipeline vandalism and other criminal acts on the waterways and strategic performance mandate of the Chief of Naval Staff, the Navy in Warri would spare no effort to battle oil bunkerers and criminals on waterways.

Commodore Garba said the waterways in the state were relatively safe as sea pirates were relocating to other states because of the manhunt for them by security agents.