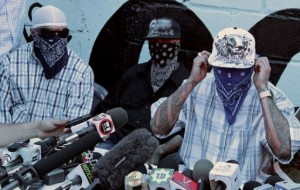 A Bishop’s effort at bringing sanity to the world’s murder capital may be yielding fruits as two of the most violent gangs in Honduras have announced a truce under church-brokered drive to stem a tide of violence in the country.

Following the example of similar gangs in neighbouring El Salvador, masked members of the “Calle 18” and “Mara Salvatrucha” gangs made separate announcements on Tuesday from within San Pedro Sula prison in northern Honduras, which houses the country’s most violent criminals.

Both gangs said they were keen to end the cycle of violence, but also demanded help from the government to find work and to be forgiven once they came out of prison.

“Today we’re agreeing to zero crimes, zero violence on the streets,” said a member of the Mara Salvatrucha gang on the ceasefire. “Both inside and outside, the boys know what we’re talking about.”

“We want change; from now on comes the positive,” added the Mara Savatrucha member, accompanied by Romulo Emiliani, the bishop of San Pedro Sula, and Adam Blackwell, Secretary for Multidimensional Security at the Organisation of American States, who brokered a similar deal in El Salvador between the two most violent gangs there.

“We’re willing to work to lower the violence, but we need everyone to be on board, because we’re not willing to be the only ones,” said a masked Calle 18 member.

Honduras has the highest murder rate in the world, according to the United Nations, with 87 killings per 100,000, while San Pedro Sula, the country’s second city and industrial hub, is the world’s most murderous city.

Violence linked to organised crime in Honduras has sky-rocketed in recent years, partly due to the presence of Mexican drug gangs who use the Central American country as a transit point for contraband.

In December 2009, the head of the government’s drug control office was shot dead by suspected cartel hitmen in the Honduran capital, Tegucigalpa, while the country’s top anti-money laundering official was murdered in April.

On Monday, Honduran President Porfirio Lobo gave his blessing to Emiliani’s efforts to broker peace between the gangs, but said the government would ensure the law is upheld if peace falters.

“The state will keep strengthening its criminal investigations in order to impose order,” he said.

Bishop Emiliani has a long history of trying to negotiate peace between the cartels in San Pedro Sula and its anarchic prison and has arranged social rehabilitation programmes for former members.

“This is the beginning of something new, but it’s not the end,” he said. “This is a covenant between the gangs and Honduran society.”