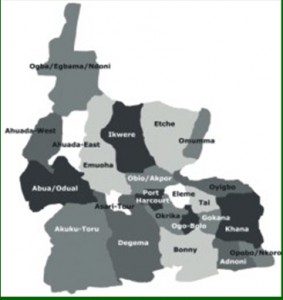 The Speaker of Rivers State House of Assembly, Otelemaba Amachree, has accused the state’s Commissioner of Police Mr. Mbu Joseph Mbu, for working in tandem with unidentified Abuja politicians to destabilize the state so that a state of emergency will be declared.

Amachree in a statement accused the Commissioner of Police of ordering the Divisional Police Officer, Rumuokoro Police Station to shut down Obio/Akpor Local Government Council, for which a caretaker committee was constituted last week.

The council Chairman,Prince Timothy Nsirim and the 17 Councilors were sacked by the Rivers House of Assembly over allegations of financial mismanagement and breach of security, and were replaced with a caretaker Committee headed by Chikordi Dike, which was sworn in by the Secretary to the State Government, Mr George Feyii on behalf the Governor Chibuike Amaechi.

The sacked council cabinet was loyal to Mr Nyesom Wike,the Minister of State in the Ministry of Education, who has been engaged in a war of attrition with Governor Amaechi, over the 2015 governorship election.

According to the Speaker, the invasion of the Council and its eventual sealing off on Friday was the first stage of the preparation to cause chaos in the state and pave way for protests that will give way for the declaration of the state of Emergency.

The Speaker said “the clamp down on officers of the council at exactly 2.00 pm by the Commissioner of Police Rivers State, Mr. Mbu Joseph Mbu through the instrumentality of the Divisional Police Officer Rumuokoro Police Divisional Headquarters, while the workers were going about their lawful duties, was in total breach of the Constitution of the Federal Republic of Nigeria 1999 (as Amended) and the Laws of Rivers State of Nigeria”.

The premises of the council was Friday barricaded by heavily armed and ferocious looking policemen, the workers ordered out of premises and the Chairman and members of Caretaker Committee were locked in, having refused to vacate the premises without any valid instrument of law.

The Speaker condemned in strong terms the invasion of the Council and the action by the Commissioner of Police and called on the Inspector General of Police to quickly redeploy him from the state.

Mbu was posted to the state barely two months ago.

“We are living in uncertain times and can no longer be sure of the safety of lives and property in Rivers State. Consequently, we call on the Inspector General of Police to cause an investigation to be carried out on this brazen abuse of power by the Commissioner of Police Rivers State Mr. Mbu J. Mbu and redeploy him out of Rivers State, before he plunges this peaceful state into a state of anarchy”, said Amachree.

Amachree called on Rivers People and Nigerians to be vigilant alleging that series of series of protests have been planned by the Abuja based Politicians and their sponsors to destabilize the state as to create a state of emergency in the State to achieve their inordinate political ambitions. [PMN]