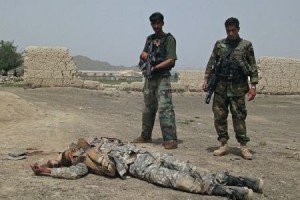 Five US soldiers serving as part of the NATO forces have been killed by a roadside bomb in southern Afghanistan, officials said.

Also confirming the incident, Kandahar governor spokesperson said that the incident happened in Maiwand district of Kandahar province when road bomb exploded on a NATO patrol in the area.

Maiwand borders Helmand province to the west and is considered one of the most volatile of Kandahar’s districts.

In another incident two NATO service members were killed when an Afghan National Army Soldier turned his weapon against them in the west of the country.

The attack came four days after three British soldiers were killed in a similar attack in the neighbouring province of Helmand.

Nineteen US personnel have been killed in the last week in three air crashes and Saturday’s bombing.