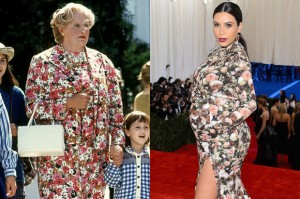 The aging comedian, who is 61, tweeted a snap of the reality star in her floral evening gown, twinning it with an image of himself in the guise of his 1993 movie character Mrs Doubtfire.

Adding insult to injury, Robin wrote: “I think I wore it better!”

In the comedy classic, the screen star plays a divorced man who disguises himself as a female housekeeper in order to be spend time with his children.

Kim turned heads for all the wrong reasons in her high-necked printed gown – not dissimilar to the curtains commonly found in the homes of the elderly – at the star-studded New York shindig on Monday night.

The pregnant socialite even wore a pair of matching flowery gloves, missing the point of the punk-themed dress code entirely