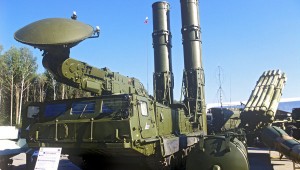 Despite reaching an accord with the United States to foster peace between the Assad regime and the Syrian National coalition, and despite Western opposition, Russia will continue working on its plans to deliver an air-defence system to Syria in order to help deter foreign intervention in the two-year-old conflict, according to the country’s deputy foreign minister.

Speaking in Moscow on Tuesday, Deputy Foreign Minister Sergei Ryabkov also accused the EU of “throwing fuel on the fire” by letting its own arms embargo on Syria expire. Rebels can now get arms easily from the EU now that the embargo has expired.

“We think this delivery is a stabilising factor and that such steps in many ways restrain some hotheads from exploring scenarios in which this conflict could be given an international character with participation of outside forces,” Ryabkov said.

Israel and France had urged Moscow to refrain from sending high-precision S-300 missile systems to President Bashar al-Assad’s government in its campaign against opposition fighters.

Russian officials have not disclosed whether S-300s have actually been sent to Syria and Ryabkov would not specify.

“I can’t confirm or deny that these deliveries have taken place. I can only say that we will not disavow them,” he said.

“We see that this issue worries many of our partners but we have no basis to review our position in this sphere.”

Russia has been Assad’s most powerful ally during the 26-month-old conflict, opposing sanctions and blocking, with China, three Western-backed UN Security Council resolutions meant to pressure the Syrian government to stop fighting.

Russia has vehemently opposed military intervention or arming Syrian rebels while defending its right to deliver arms to the government, its long-time client – though it says it has been supplying only defensive weapons under existing contracts.

Earlier Ryabkov said the EU’s failure to renew an arms embargo on Syria would undermine the chances for peace talks that Moscow and Washington are trying to organise.

Both the Syrian government and the opposition have agreed in principle to enter direct talks in the Swiss city of Geneva next month.

More than 94,000 people have died since the uprising against Assad’s regime erupted in March 2011, according to the latest UN figures.