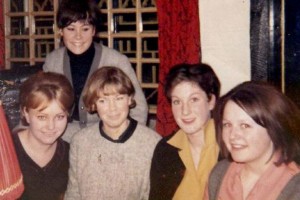 It is always a surprise to see how old school mates have turned out, but one group really got a shock – when their reunion was organised by a friend they thought was dead.

Mum-of-two Christine Greenslade, 66, was keen to meet up with her old pals after moving away in her late teens.

But when she started phoning them, she was greeted with stunned silence.

A newspaper had announced her death more than 30 years earlier and Christine – who had been living abroad for years – was oblivious.

She said yesterday: “I got in touch with a school friend called Viv Albright and she sounded odd on the phone.

“It wasn’t quite the reception I was expecting from an old friend. Later she rang me back and said ‘I’m terribly sorry, but we all thought you were dead’.

“Viv explained that they all saw the obituary. She said they were all terribly upset because I’d died so young.”

The mix-up came when Christine’s mum Pamela died of cancer in 1980.

Christine put an obituary in The Cornishman newspaper, but staff used her name instead.

It read: “Christine Greenslade has died, leaving three children and a husband.”

Christine, who was 34 at the time, was living in Ipswich, Suffolk, and did not get chance to read the notice.

She said: “Looking back I was in a bit of a state when I rang the newspaper because I’d just lost my mum.

“But I can remember the man on the phone asking for Mother’s name at the start of the call, and then asking for mine at the end.”

Christine only realised the blunder after deciding to visit her old home in Penzance, Cornwall, and organise the reunion for friends from St Gertrude’s Convent.

One pal, Jane Johnson, 66, said: “I always thought of her, and missed her terribly. To lose all those years is awful but we will try to make up for lost time.”

Since Christine left Cornwall she has worked abroad as an artist and interior designer in Spain, Germany, Italy, Bermuda and France.

She will travel over from her home in Maine-et-Loire, western France, for the planned reunion next Wednesday.

She said: “I’ve been all over the world and had plenty of adventures but I’ve always wanted to catch up with my old friends.

“It’s very sad to think that they mourned me all those years, but at least I’ve got plenty to tell them.”