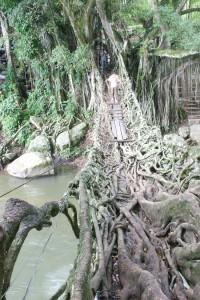 For the last hundred years, the residents of two tiny Indonesian villages in West Sumatra have used a 30-meter-long bridge formed from the interconnected roots of two trees located on each side of a fast-flowing river, to reach each other and trade supplies. Today, the natural wonder known as “Jembatan Akar” has become a popular tourist attraction.

According to locals the amazing tree root bridge was built in 1890, by Pakih Sohan, a Muslim teacher from Lubuak Glare, disappointed by the fact that students from Pulut-pulut couldn’t attend his classes on Islam and Quran recitations due to the Batang Bayang river that separated the two settlements. He planted two small Jawi-jawi – a type of  broad-leaf banyan tree – and started stringing their roots around a stem bridge made of bamboo. In just a few years time the two trees reached each other over the river, but the bridge wouldn’t be able to support the passing villagers’ weight for another two decades. It took approximately 26 years for Jembatan Akar to become the sturdy bridge it is today, and with each passing year, it becomes even stronger, as the banyan tree roots continue to grow.

Dangling a around 10 feet above the fast-flowing waters of Batang Bayang river, this masterpiece of organic architecture becomes pretty dangerous to cross when it rains because of the slippery roots. To make it more stable and prevent accidents, villagers added a series of wooden planks over the roots and reinforced the two trees with steel wire. It can now support dozens of people at a time. The Jembatan Akar bridge has been a vital link between the two villages of West Sumatra for almost a century, but soon the heavy crop trading traffic will be diverted to a suspension bridge built not far from the root bridge. But that doesn’t mean this natural wonder will be forgotten. More and more tourists, both Indonesian and foreign travel to this place just to take some photos and walk over its interlinked roots.

Jembatan Akar is no the only tree root bridge in the world. The living bridges of Cherrapunji, in India, have fascinated both tourists and scientists and eased the lives of locals for centuries.