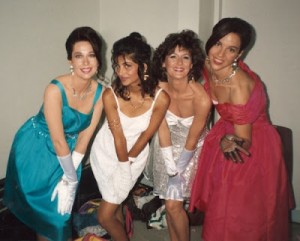 The first picture ever uploaded on the web was posted by Tim Burners Lee (inventor of the World Wide Web) on behalf of a comedy band called Les Horrible Cernettes.
Report

Every day millions of photos are uploaded to the Internet on countless blogs, Facebook, Flickr, Twitter, etc. But have you ever wondered what the very first image upload looked like? Well look no further, because the tech site Motherboard has done the digging for you.

In 1992, a picture of the parody band Les Horribles Cernettes, that was digitally altered in Photoshop, earned the distinction of becoming the first Web photo upload.So who are these ladies pictured in the image? The group of ladies were lab employees who worked for CERN, a research laboratory in Geneva where major discoveries have been made, including the project that started the World Wide Web, created by British computer scientist Tim Berners-Lee.

Berners-Lee was looking to test a Web system that could support photos and asked IT developer Silvano de Gennaro to provide an image. De Gennaro chose an edited image of the ladies of Les Horribles Cernettes, whose nerdy song lyrics included the words “you say you love me but you never beep me.” Part of the reason the upload was so revolutionary was because the Internet was previously seen as a place for conducting serious business, not having fun.

De Gennaro, who snapped the picture of the ladies for their next CD cover, never could have imagined the place it would have in history. “I didn’t know what the Web was,” he said later. “When history happens, you don’t know that you’re in it.”