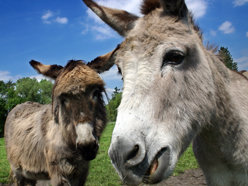 A pair of donkeys will be put down after they chased down a pensioner on his motor scooter, dragged him off and killed him.

Sandor Horvath, 65, a retired firefighter, was visiting a pal’s farm in Magyarszecsod, Hungary, last week when he was attacked by killer donkeys Muki and Szamoca.

The animals bit and trampled him to death after dragging him about 50 metres, according to Horsetalk.co.nz.

Horvath was so badly mutilated he was missing a hand and it was originally thought he had been ravaged by a wolf pack.

An autopsy determined the donkeys were responsible for killing Horvath, who lived in a nearby cottage.

Police said the donkeys will be treated like dogs that kill and euthanized.