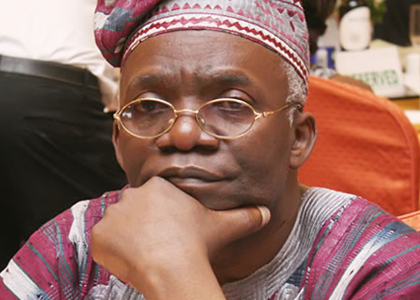 Human rights lawyer, Mr. Femi Falana (SAN), on Sunday asked the Federal Government to equip security personnel deployed in the fight against insurgency in the country rather than shedding crocodile tears for the victims of insecurity.

In a statement, Falana decried the working conditions of less-equipped policemen and soldiers who were being deployed in fighting terrorists that were armed with more sophisticated weapons.

“It is inexcusable to deploy ill-trained, ill-equipped and ill-motivated soldiers and policemen to war zones, armed with only AK 47 rifles without bullet proofs, serviceable vehicles, communication gadgets to fight suicide bombers with more sophisticated weapons,” he said.

Falana listed the challenges facing security personnel in the country to include non-provision of life insurance policy and accommodation, irregular salary payment among others.

He said, “In view of the foregoing, the Federal Government should stop shedding crocodile tears having carelessly risked the lives of soldiers and policemen who are made to fight guerilla war without any training.

“The Federal Government should take urgent measures to train and equip the security personnel deployed to the battle fields; purchase helicopters for aerial survey of the north east zone; upgrade medical facilities, including the provision of ambulances; fortify police stations and barracks as well as prisons and other detention facilities.

“More importantly, the Moble Unit of the Nigeria Police Force should be retrained and equipped to contain terrorism, kidnapping, insurrection and civil disturbances so as to limit the armed forces to the defence of territorial integrity of the nation.”

He warned that the United Nations Security Council might sanction the Federal Government even as it might have to pay damages to victims if it continued to risk the lives of its security personnel and civilians.

He added, “If the Federal Government continues to risk the lives of security personnel and expose the lives of the civilian population to danger in the war against terror, Nigeria may be sanctioned by the Security Council of the United Nations in view of the ongoing investigation into the Baga invasion being conducted by the government of an influential member of the body.

“Locally, the government is also liable to be dragged to local courts to pay damages to the victims of preventable deaths arising from the negligence of the state to secure the lives of Nigerian citizens.”