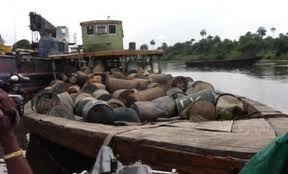 Shell has given kudos to the Joint Task Force, JTF, set up by the Nigerian Government to check oil theft in the Niger Delta as it said the menace has drastically reduced.

The Nigerian unit of Anglo-Dutch oil giant had constantly complained about the high incidence of pipeline vandalism and crude oil theft, which has resulted in revenue losses estimated at over $10 billion annually, and had recently threatened to shut down its operations if nothing was done to urgently contain it, but the firm said there has been visible improvement.

Speaking on the sideline of the Offshore Technology Conference, OTC, 2013, in Houston Texas, USA, the Country Chair, Shell Companies in Nigeria, Mr. Mutiu Sunmonu said: “Certainly, it was on the increase a few months ago.

The Shell boss refused to quantify, as he regularly did in the past, how much oil had been saved since JTF swung into action.

He said: “I will be in a position to tell you when our Nembe Creek trunk line is back up. But right now, that line is down. Like I said, we are removing the bunkering points from that line.

“Once all those bunkering points are removed and the line is up and running, we will then be in a position to judge how much oil we are still losing. But right now, whatever figure I give you is really going to be artificial.”

Sumonu regards as most important, the fact that JTF is getting more and more effective.

“We are having almost a daily discussion with them and they do give us good reports on their efforts so far. I have been in discussion personally with the Chief of Naval Staff and the Chief of Army Staff and they have all given their commitments to work with oil companies to stem the tide.

“We are seeing progress. But like I told you, this is a very big operation. So I am not expecting solution over night.

“But what I am expecting is that government security agencies will really keep at what they are doing now. If they keep at it for a while, I am sure we will begin to see a significant reduction.

“Almost on a daily basis, they are foiling attempt, arresting vessels and destroying illegal refineries. In a place like Bodo, a week or two ago, they foiled over 30 different attempts by crude oil thieves wanting to attach additional tapping point to our line.”

“We see all these successes everyday, but we just need to keep at it, because you cannot afford to take your eyes off the ball.”

The firm had declared more force majeure, since the year began, than any other oil major operating in Nigeria, a legal clause that absolves it from contractual obligations for failure to meet supply agreements.

Sunmonu noted that this will keep up for a while until “we fully recover because even with all the efforts that government security agencies are putting in, there are some steps we need to take together jointly in order to make sure the effects are not continuing.

“So the force majeure that you have seen declared is for us to some of the very bad bunkering points that have been put on the line, because we don’t remove them, even if you have the whole Nigerian Army in the creek, you still continue to see crude being stolen. So our initial attempt is to remove those bunkering points to compliment what the security agencies are doing.”